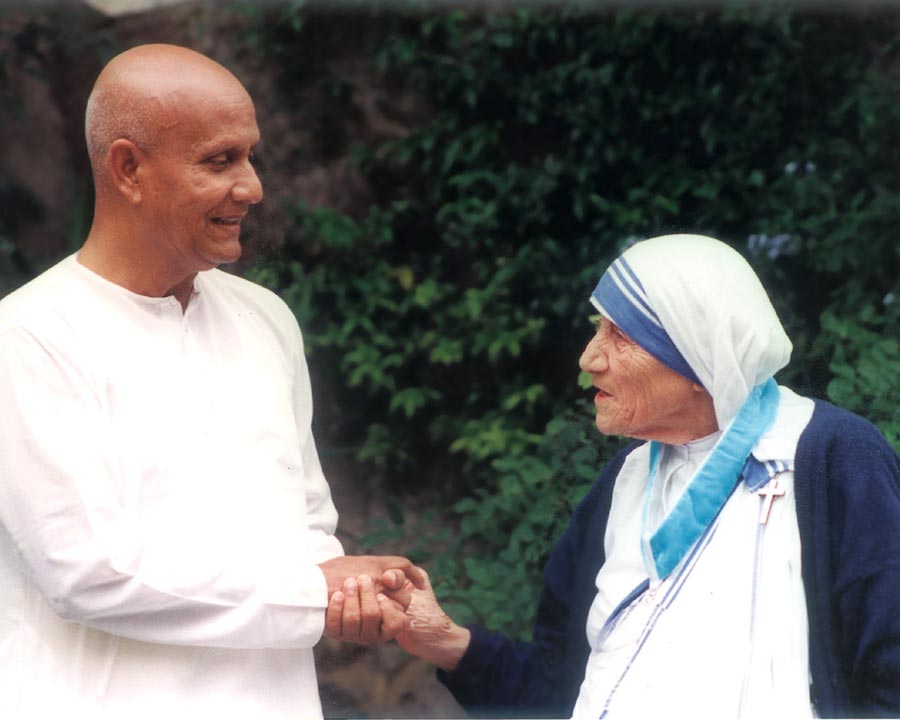 Sri Chinmoy first met Mother Teresa in 1975 at the United Nations. Over the years, they became dear friends.

Mother Teresa was on the precipice of death several times in the year prior to her earthly departure. Journalists and others were preparing themselves for her passing, but several miraculous extensions of her life took place.

After suffering a heart attack on November 22nd, 1996, Mother Teresa was close to death. It was widely reported that most probably she would not survive the illness. The doctors wanted to implant a pacemaker in her heart to strengthen her heart function. But Mother Teresa was so weak and her condition so critical that the surgery could not be performed.

Unbeknownst to either Sri Chinmoy or to the general public at the time, one of Mother Teresa’s nurses later reported that Mother Teresa said she wished to be allowed to pass on and that she did not want the doctors to touch her.

On the evening of November 28th at 9:45 pm, Mother Teresa’s soul came to Sri Chinmoy at his home in New York.  About thirty of his students were present for a special evening of meditation. For several minutes Sri Chinmoy sat motionless, absorbed completely in his inner experience.

Later that night, he recounted in detail his conversation with Mother Teresa’s soul. She had decided to leave her body.

Mother Teresa told me, “Chinmoy, I have come to say my final farewell to you.”

Lovingly, she replied, “I did not know that you were such a clever fellow! You are a rascal!”

Mother then asked me, “You do not obey God’s Will?”

I told her, “Even after knowing God’s Will, on very rare occasions, we plead with God if it is something totally pure and innocent. In that case, sometimes God listens to our fervent prayers and extends a life a few more years. If we see that God is very serious, then we will not even dare to ask God any favour.  We will instantly obey God’s Will.”

I continued pleading with her to stay on earth. “Mother, you have told us that it is you who have made the decision to leave the body. It is not God’s decision. It is your decision. Therefore, you can have no objection if we pray to God to keep you on earth for a few more years. I am pleading with you, Mother, to stay on earth for a few more years.

“Again, Mother, I am telling you that if God becomes serious and really wants you to leave the body, then immediately I shall obey Him. I do not think that it is the Absolute Will of God for you to leave us. No, it is not His Will.”

She replied with her loving command, “Then pray for me.”

“What have I been doing? For the last few years I have been praying for you with all my heart and soul. I happen to be one of those who has most sincere love and affection for you, Mother.”

She gave me a broad smile and said to me with utmost love and affection, “You naughty boy!”

Sri Chinmoy prayed and meditated most powerfully for Mother Teresa for another fifteen minutes. Then he went upstairs to call his family in India to hear the latest news about her condition.

Just hours after his inner conversation with Mother Teresa, she made a dramatic recovery that astounded the doctors. Soon after, the entire world came to know the wonderful news.

As a result of Mother Teresa’s improvement, the doctors were able to operate to insert a pacemaker in her heart — something they had not dared to do while she was so ill. By the following day, Mother Teresa’s condition had greatly improved.