An example of Guru's inner guidance

When Guru was in the physical, after my meditation every single morning, almost every morning, Guru would call me on the phone. I had a special phone that Guru gave me. It was just for him, it was his phone. He would call usually at 6:30 or 7:00 in the morning and ask me, “What news?” and then give me advice. Really, I was sharing news with Guru, but he was blessing me and guiding me and doing everything through his Blessings and his spiritual Light.

Also my name means ‘eagerness’, but nobody in the universe had more eagerness to manifest the Supreme than Guru. When we had good news in manifestation, Guru got so happy. If you serve Guru through manifestation based on your inner connection to Guru, you serve outwardly other people. And you have to know that it makes Guru so happy.

One beautiful example, I will give you.  A few years ago, I was so eager, eager to have a statue in East Timor. It is a small island that used to be a part of Indonesia. The people are mostly Roman Catholic and they were terribly mistreated by the Indonesians.
It was 2013. I was inspired because we were going back to Indonesia and I wanted to try for a statue of Guru in East Timor. 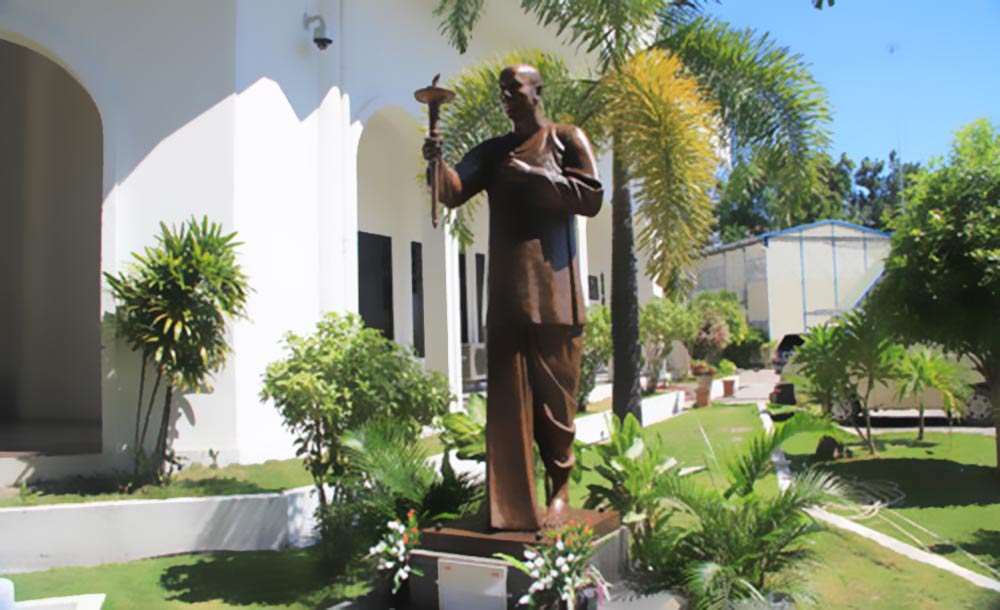 Just as an example of how meditation and manifestation go together, I was meditating in the morning and I was basically praying to Guru: “Guru, please help me, because I cannot get the number. Please, you must help me.”

I was sitting at my shrine and I could hear Guru tell me, “Good boy, just put a seven.”

I got up from my shrine, went to my desk and started to call the number. All right, I will just put a seven. I pressed the number seven and the rest of the phone number.

I was overwhelmed because the line started to ring and this man answered the phone with a deep voice: “Hello?” I recognized that it was the voice of the former Prime Minister. It was him!

I told him the story, that we were coming and we would love to have a statue of Sri Chinmoy. He was just so happy and said, “Bring it, bring it. We will find a nice place.”
I came back to my shrine and started to cry out of gratitude to Guru. It is all Guru’s miracles and Guru’s love.

This is a beautiful example of how meditation and manifestation go hand in hand.

During your deep meditation,
If you receive a message from within,
Then spontaneously, sleeplessly
And with utmost humility and devotion,
Try to manifest it into reality.