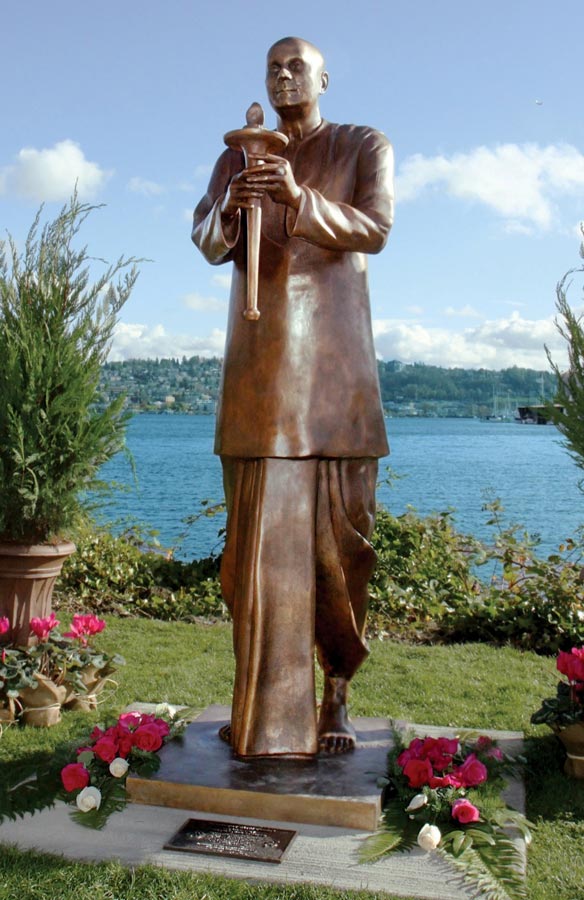 Since Sri Chinmoy’s passing in 2007, more than 40 statues of his likeness have been placed in major cities and remote natural settings around the world.

Many people, especially children, seem to feel a living presence in the statues. Adults have reported feeling inner guidance for a decision or consolation in their grief. A few of their stories follow, as reported by members of the Sri Chinmoy Centre worldwide — just a few glimpses into a spiritual Master’s love and concern that continue long after his earthly life.

A young lady often came to offer owers at the statue in Vienna. She had lost a child and was inconsolable in her grief.  Once when she casually stopped at the statue for a while, she had an unusual experience that changed her life: suddenly she could make an inner connection with her child’s soul and speak with her. She said that this experience happened repeatedly, but only at the statue.

One evening in Seattle, a young girl taking a stroll with her father came very close to the statue, exclaiming,“Daddy, Daddy, he is alive! He is alive!” Her father said,“Dear, it is only a statue.” She came even closer and grasped the torch, then repeated, “No, Daddy! I can see he is alive!”

A sweet Indian boy about three or four years old came to Sri Chinmoy’s statue in Seattle with his father. He gave the statue a big hug, exclaiming “Grampa! Grampa! Grampa!” with boundless joy. We asked him if he would like to give Sri Chinmoy a flower and he was jumping with eagerness. The boy was so happy. Then his father said with a big smile on his face, “We come here every day. Rahul calls Sri Chinmoy ‘Grampa’.”

A woman at the statue in Antarik, a spiritual retreat in the Czech Republic, shared, "When I have a hard time or I need to solve a problem, it helps me if I come and sit at the statue Then the problems either get solved or, if I have to decide something, I know it will be the right decision."

A few weeks after the dedication ceremony for the statue in Mazatlan, Mexico, fresh flowers began appearing every morning at the statue, which has a panoramic view of the ocean. One woman who was caring for the area was very eager to find out who was bringing the flowers. She kept coming earlier and earlier every day, until finally one morning around 5 a.m. she saw two elderly, weather-hewn Mexican fisherman offering flowers most lovingly. The next day she saw them again and ran up to speak with them.

They explained that they had been fishing near this spot for years, but in the previous year they were unable to make a living because there were so few fish. Only a couple of weeks earlier, they had noticed the statue and had come to see it, bringing flowers and offering a prayer to God to help them.

That very day and ever since, their catch increased dramatically. The men said they had no idea who the man in the statue was, but knew only that he was a great spiritual man who was helping them feed their families.

Three school teachers in Mazatlan, Mexico, had their students form a circle near the statue, asking them to read aloud one of Sri Chinmoy’s aphorisms and reflect on its meaning. The teachers would ask each child,“Have you understood? What does this great sage mean here?” The children would also recite their favorite aphorism, learn it by heart, explain it in their own words and write it in their notebooks. One teacher explained, “The aphorisms are so beautiful! We are taking children to this place so they can see that there are people like this great man who do great things for the world.”