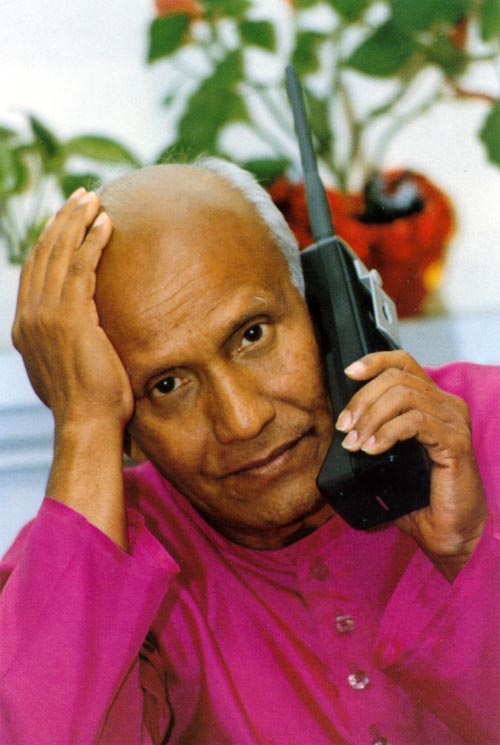 One day, around 5:30 in the morning, Sri Chinmoy called and said, “O my God! What is happening with Nayak?” Nayak is a fellow student of Sri Chinmoy, and is the leader of the Seattle Sri Chinmoy Centre along with his wife Nandita.

I said,“What is happening, Guru?”

He said, “He is in the hospital. Call and find out what is happening. Something very, very serious — he is very seriously ill.”

I called Nandita, and she had just brought Nayak to the emergency room. I called Nayak, and he sounded very weak. He was waiting to be seen. When I told Sri Chinmoy, he asked if I would please go quickly to the hospital. When I saw Nayak, his EKG showed that a very serious myocardial infarction, a heart attack, was actually in progress. The whole left side of his heart was blocked. Nayak looked so ashen — he looked very bad. He was very emotional, and the situation was extremely difficult.

Sri Chinmoy had said to call him as soon as we had any news. So I called and Sri Chinmoy said,“Please tell Nayak I am putting a very, very, very strong force on him. And call me in fifteen minutes.”

I told Nayak and Nandita, and they were very moved. Then the doctors came in. They had drawn blood to see what kind of heart attack it was, and they were looking at the heart tracing on the EKG. Amazingly, after Sri Chinmoy’s call, Nayak started to get better. He started to talk, he was joking, his colour was getting better. The cardiologist was asking the assistants, “Why are you going so slowly?”— but it was because Nayak was doing better. They were sort of joking with him.

The hospital cleared the whole schedule of patients so that Nayak could get a catheterization, the insertion of a tube so they can visualise the heart. The cardiologist was extremely good; it was at the University of Washington Medical Center Hospital, which is the best hospital in the Pacific Northwest. We wanted to stay with Nayak, but they said no, it would be about ten minutes, and then they would do whatever they felt needed to be done

I had called Sri Chinmoy again after 15 minutes, and Sri Chinmoy had said again that he was putting a very, very strong force on Nayak, and by that time, Nayak was actually joking with the doctors. He was looking so good, yet apparently there was a major heart attack going on It was amazing.

After a while, the nurse found us in the waiting room and said, “Okay, now you can see the doctor. The procedure is over ” When we entered the room, the doctor said, “I want to show you something. These are the films we took of Nayak’s heart a year and a half ago. These are the films now. Do you see any difference?” We were looking at the films, and he said, “We did not see any difference. We discussed it. We could not imagine what was going on. We have a mystery here, because here we show signs in the EKG of a major heart attack, and now there is nothing going on inside the heart, and he is doing very wel. ”

I said, “Well, what about the lab tests? Do they show anything?” because you can see from the tests if there is any damage to the heart tissue.

He looked at us and said, “The lab tests are normal. Something is going on!” The doctor was absolutely astounded. So I told him, “We have a meditation Teacher. I don’t know if you believe in prayer.” He smiled and said,“I very much believe in prayer.” We all knew that Sri Chinmoy had saved Nayak’s life. In fact, Sri Chinmoy later told Nayak that if I had delayed contacting Sri Chinmoy for 15 more minutes, Nayak would have had a massive fatal heart attack.