The first time I saw Guru in person was when I became a disciple in San Francisco, but the very first time I got to see him quite closely was in 1975. I was a medical student, learning to become a doctor. I was also doing research, and my advisor paid for me to go to a conference in Iceland which Guru was also attending. This was a conference on what was called “transpersonal psychology” and Guru had been invited to offer the opening meditation for the hundreds of participants.

It was a very small conference, and at lunchtime we all went to eat. Guru was there, and I happened to be sitting right across from him. I was so overwhelmed I felt as though I almost couldn’t breathe. My heart was full of joy and awe. Whenever you were close to Guru, his physical presence was so incredible, along with the spiritual aspect of being with your Master. He had so much life energy you could feel it emanating from him.

There was a cuckoo clock in the lunchroom, which would say “Cuckoo!” for the number of hours on the clock. We were eating at 12:00 noon, so the cuckoo clock went off twelve times while we sat there. I was amazed because instead of saying “Cuckoo!” the clock seemed to be saying “Guru!” twelve times. I was absolutely stunned. 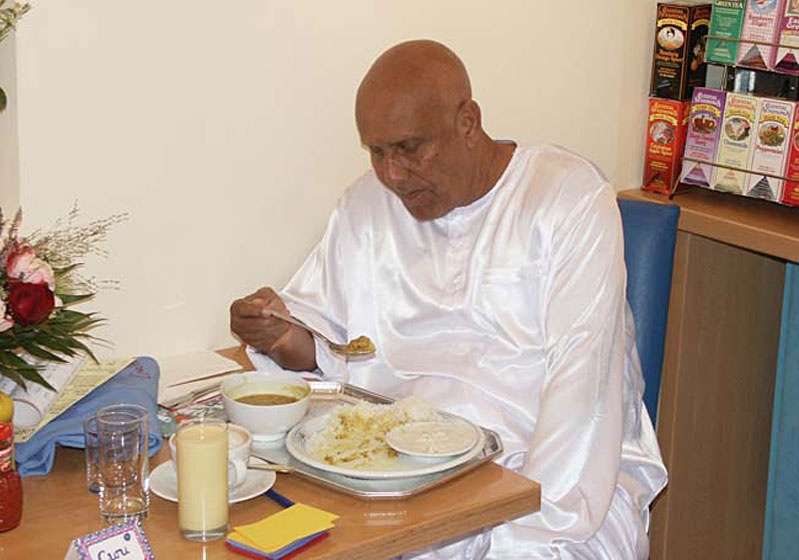 I realized later that the clock was probably saying “Cuckoo,” but Guru’s presence was so strong that I heard the clock say “Guru” instead. No matter what it actually said, being so close to Guru for the very first time that day was a hugely significant experience for me as a young disciple. I treasure those moments to this day.

We came into the world,
Not only to eat material food,
But also to feed our heart
With our aspiration-meal.