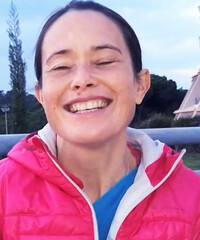 Such a profound experience of protection

I will share a story with you that happened with my oldest son. When I came to Sri Chinmoy's Path, my youngest was 10 years old and the oldest was 16. Since the first day, I started praying to Guru to protect them.

Four years ago, I had a very strong experience of Guru's protection of my oldest son. He had a serious motorcycle accident and had to go to surgery. He broke some bones in his leg and his arm, also in his chest.

I was about to start teaching a meditation class. Before the class, when I was preparing myself, I received a phone call from my youngest son. He was telling me, "Mom, something happened—my brother had an accident."

As I'm a nurse, I immediately started asking so many things that my youngest son could not answer. I told him, "What do you know? Who called you? What happened?"

He said, "Please don't call my brother. He's having surgery. Later someone will call you."

I started making some phone calls anyway, but nobody answered. I had to give the meditation class, so I went to the class. I don't remember anything that I said or any mantra that I sang with the seekers. But I remember that in the silent meditation, I was always, always, always, all the time asking Guru to save my son because I didn't know how he was in that moment.

Then I left the meditation class. A few minutes later I received a phone call from one of my son's friends. He was telling me that my son was still in surgery and maybe I would receive some information only the next day. That all happened in the morning.

I was telling him that I had already started to look for flights to England because he lives there. He told me, "No, no, please, Mom, don't come because I will stay in the hospital for some weeks. I don't know exactly but maybe things will go well and I can come home earlier. Please wait until I have some more information because if you come now, you will be allowed in the hospital for only 10 or 15 minutes. Then you will be alone all the time in my house."

He told me, "You have the Peace Run in Madeira, so please go. Please go. Then I will call you. You can organise everything from there."

I did it, I went to the Peace Run. It was amazing and very difficult at the same time. Even while on the Peace Run, I started to organise my life in Portugal with my youngest son and also my work and flights to England. The next time my son called me, I told him, "OK, in a few days I will be in England." He said, "That's great because in a few days I can go back home."

In that moment I started crying and I told him, "Of course, something held you. Because every day I pray to my Guru to protect you, to protect you and your brother. So I believe it completely." He said, "I don't know, I just know that something held me before I hit the ground."

This was such a profound experience because my son believes in God and he believes in Sri Chinmoy. I had given him a photo before he left Portugal. I told him, "Please, whenever you are in trouble or afraid or anything, please pray to Sri Chinmoy, to my Guru, to your Guru."

I don't know how long after this call, I called him and he did not answer. I called his friend, who told me, "He is with the doctors. I don’t know what is happening.”
After a while, my son called me back and told me, "Mom, I have to go to surgery again. I have an infection. They told me that they cannot leave the material in the bone that they put before. So I think this will be much longer and I don't know what will happen." He was crying. I told him to be brave because I was coming.

The next day he called me. He told me, "Mom, you will not believe it. They gave me medicine and I went to get x-rays this morning. They told me that everything is okay. The x-rays show a completely different picture than yesterday." I was crying again. Then he told me, "You know, Mom, I prayed all night long. I was thinking about you. I was thinking about your Guru."

Two days later, I was with him at his home. I'm a nurse and I'm his mother, so it was a great moment. This is my story.

I beg God for His Protection.
God says to me:
“Can you not see, My child,
That I have already given you
My Protection-Heart?”

More stories by Florbela »
Next story