Showing a video to the Prime Minister of Nepal

Mridanga was the videographer for many of the events that took place in Sri Chinmoy's life.

We were in Nepal for the Sri Chinmoy Peace Nation dedication. We had the ceremony, which was very nice. The Prime Minister came, big shots came, and the next day Guru gave the Prime Minister the U Thant Peace Award.

When meeting big shots, I would check and double-check and recheck the equipment, and normally I would bring a backup camera, just in case, because many, many things could go wrong. Actually, I don’t think ever there were any major problems, but there was an enormous amount of stress beforehand for me. I never really enjoyed the meetings because I was so focused on checking that everything was working.

That was a very difficult day because whenever Guru gave the U Thant award, Guru wanted to show the U Thant video. I had brought that video cassette with me to Nepal, but the videotape had gone missing. After the ceremony the tape was gone.

So I asked the hotel staff, I looked through their electronics room, but they were very unhelpful. I knew, oh God, that Guru was going to be unhappy.

So, the next day we went through all the security into the Prime Minister’s house. I was already there filming with my camera when Guru’s car came in. I started to film, but the camera went blank, and I’m, like, oh God, all these things today! I reset the camera, which was a Canon XL1. The lenses had come loose, and some other things. I was frantically trying everything, resetting, and thank God it finally started recording.

The event continued on, and it was very nice, but all the time in the back of my mind I was thinking: “Guru’s going to want to show the video and we don’t know where it is.”

I said, “I’m sorry, Guru, the tape went missing from the hotel.” Guru gave me this look, and I was like, oh God…

But then the Prime Minister called me over and he said to me, “Which hotel?” He asked me the situation of its disappearance, and then he called over one of his assistants.

We found out much later when we came back to the hotel, that the staff had suddenly changed. Suddenly they became very helpful. “What did you say? What did you say? A government minister came and told us there would be a police report, a whole police investigation. We have to find this tape!’”

Saudamini, who was our contact with Nepal, raced back to the hotel and brought the tape to us. Well, of course, that all takes time. So, Guru had the singers singing and Guru was chatting with the Prime Minister. They got on very, very well. Guru was very comfortable with him. All his assistants wanted him to leave because he had other events that day, but he was happy to stay with Guru. 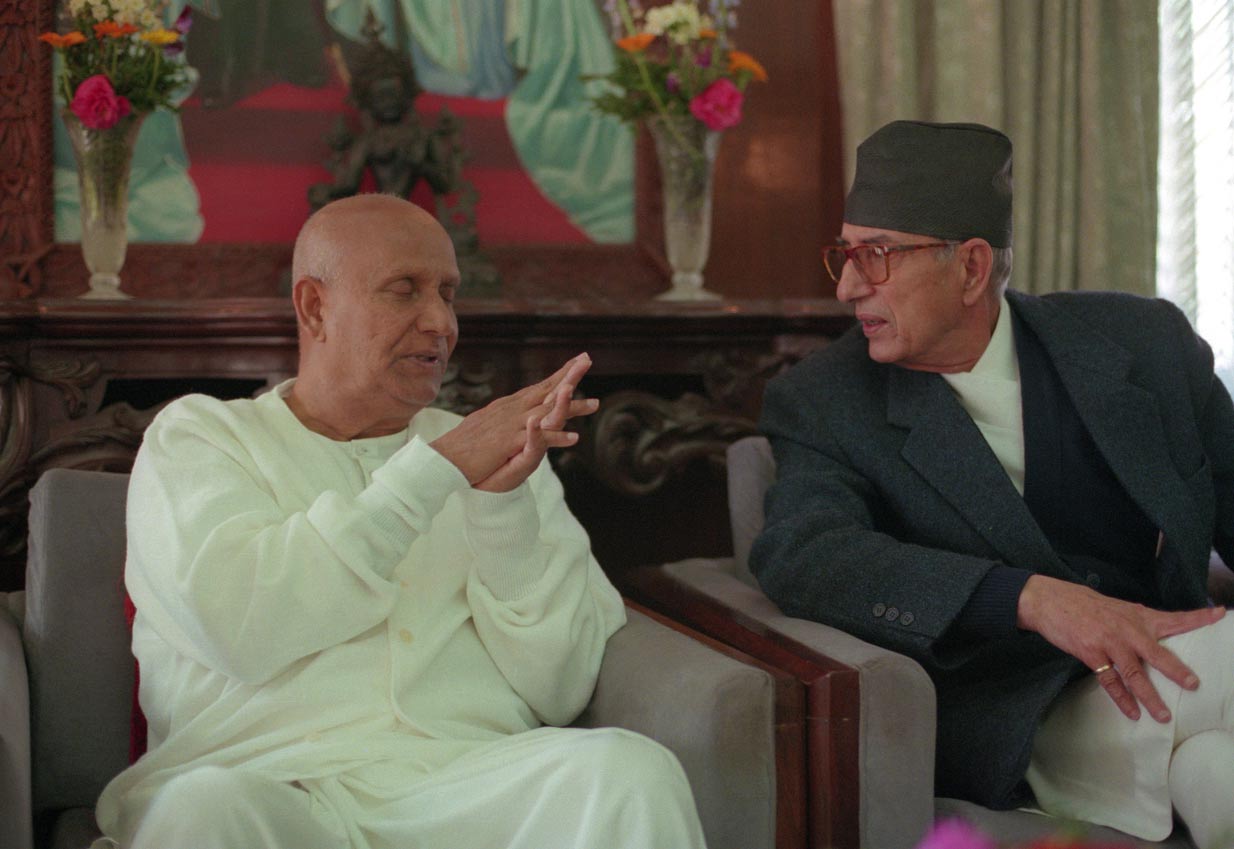 Well, the videotape arrived and of course, you would expect there to be a television and a video machine in a president’s or a prime minister’s house. But then we realised there wasn’t one. Oh God. But luckily, Prajapati, a Nepali disciple who is a teacher said, “I know someone who lives on this street.”

So, he and I literally ran out of the Prime Minister’s house down the street, and he bang, bang, banged on this big gate.

Now, I found out later that he did not really know this person. He had met him once, and when the door opened, it was the person’s wife. The disciple spoke in Nepali, so I couldn’t understand. I could just understand the words “Prime Minister” and “television.”

So Prajapati and I ran into the house and upstairs where the teenage son was watching television and I just took the television. He was watching TV, but he was so nice. I grabbed the TV and Prajapati took the VHS machine, and we ran back down the street to the Prime Minister’s house.

We just ran right through the security. They didn’t check us or anything. We ran into the room, and I plugged it in. The government aides were saying, “Oh, no, no, no, there’s no time!”

I just ignored them and plugged in the TV and VCR. They turned on, they turned off. Oh, no! The power supply was very basic in Nepal, so I had to hold the plugs in against the wall while the video was playing.

But then it all worked. Everything went well. And I felt such relief and joy that I could do this for Guru.