'Christ has stolen her heart and brought it now to me'

Dodula: I was a happy nun at my convent. I had friends and was successful in my job working with children. The institution where I worked and lived was situated by the lake with a view of the mountains. I felt like I was at the zenith of my life. No outer circumstances could have made me leave the convent.

In 1988, I was taking an advanced training course at the University of Zurich so I could serve as a therapist for children with behavioural problems. I was hoping the course would help me to serve these young people better. I was looking for teachers whose theories reflected life; however, with the majority of the professors, I did not see any correlation.

One evening after the lectures, I was on my way out when I saw a poster in the foyer that said “Introduction to Meditation.” I thought to myself, “When I studied here in my younger years, this topic was unknown. But the Bible says, ‘Try all and keep the best.’” So I decided to attend and see what the evening had to offer.

The lecture was given by psychologist A.K. Beyer (whom I now know by his spiritual name of Kailash). In his case, I felt that word and deed went together. After the lecture I registered for an upcoming meditation seminar.

Gunthita: When Dodula first came to Kailash’s lecture, she was dressed in her black nun’s costume. To everybody’s surprise, she was one of the ten people who signed up for the follow-up. Kailash spoke the first evening, and I continued the remaining three evenings. Kailash told me that in case this nun continued for the entire course, I had better not speak about how to become a disciple, in order to avoid problems with the church. Sure enough, she was one of the few people who stayed until the last class.

Right from the beginning she was so open to Guru. She loved his Transcendental photograph; she said it was always smiling at her. She bought many books, which she also gave to her nun sisters and the Mother Superior. She also bought quite a few pictures of Guru and put them up in her little room.

When I was in New York, I was inspired to tell some of the experiences she had with Guru’s music and with the Transcendental picture in connection with the children she was teaching. The stories were as beautiful as fairy tales, but they were real! Guru’s only comment was: “Is she not a disciple?”

I answered: “No, Guru, she has been a Catholic sister for 27 years!” Guru just smiled compassionately at my stupid answer.

Dodula: In these classes I learned to meditate, and I also bought two books by Sri Chinmoy—one about happiness and the other about meditation. While reading, I recognised the message as being the same as the one Jesus had offered humankind 2,000 years earlier. Sri Chinmoy’s philosophy even helped me to understand the Bible better and to love it more.

As I read more of Sri Chinmoy’s books, a new spiritual horizon opened up for me. Meditation filled me with joy and a greater love of God. Sri Chinmoy’s disciples told me that he had been to the Vatican several times. Pope Paul VI once told him during a private audience, “Your message and my message are the same. When we both leave this world, you and I, we will meet together.” Sri Chinmoy had also met several times with Pope John Paul II. 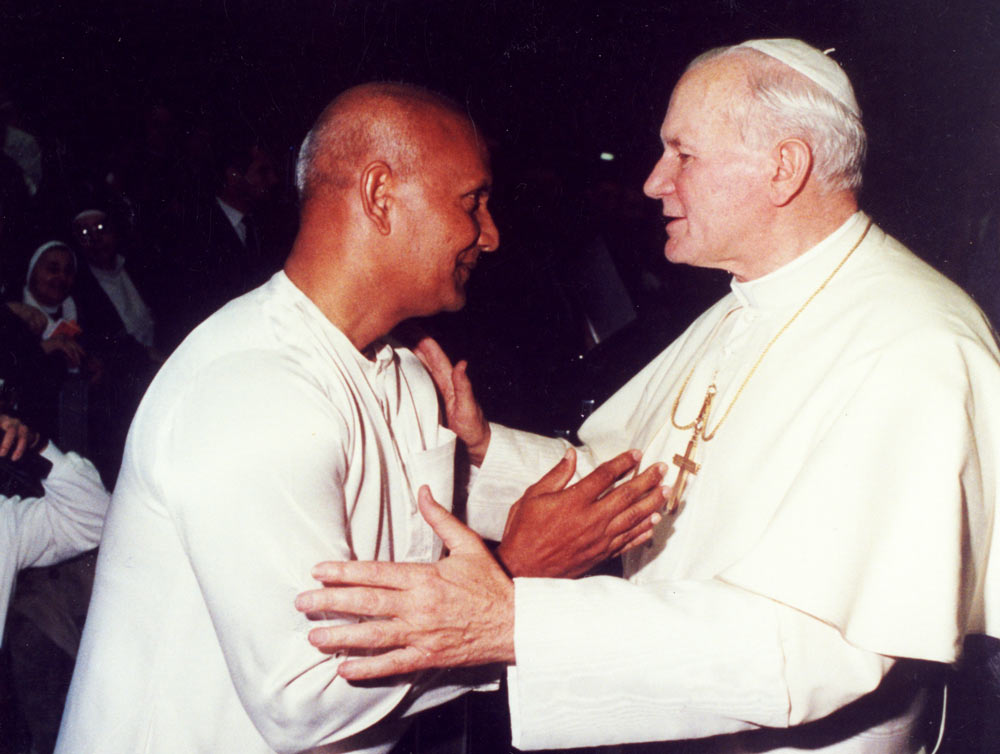 The fact that a human being could have such oneness with the divine made a deep impression on me, and I subsequently had several spiritual experiences of my own.

Gunthita: After a few weeks, Guru came to Munich, and since Dodula came to our Madal Bal store every week, I told her, “Next time I will not be here; I will go to visit Sri Chinmoy in Munich.” She said that she had written a poem for him and asked me if I could translate it and give it to him. I opened the envelope, and there was a photo of her inside. I asked her why she wanted to give Sri Chinmoy a photo of her (since I never told her how to apply to become a disciple). She said that since she had so many pictures of him, she wanted him to have at least one of her, just so that he knew who was thanking him for all his blessings and help.

Then I had to tell her that Sri Chinmoy happened to be not only a peace philosopher, artist, composer and poet but also that he was a spiritual Master of the highest order who accepted his disciples through a photo. She had tears in her eyes and said, “If he is not my teacher, then who is my teacher? I learned from him much more in these few months than I learned in all my 27 years as a spiritual sister in the convent!”

When Guru saw her picture, he accepted her as a disciple and said, “Christ has stolen her heart and brought it now to me.”

Dodula: In 1989, Sri Chinmoy expressed the wish to visit a convent in Switzerland. He gratefully accepted the invitation of the prioress of the convent in Cham. Upon arrival he first went to the chapel, where he prayed, meditated, and sang. After this, he answered various questions from the nuns. At one point Sri Chinmoy came to my table and invited me to come to New York in August.

“How is this possible?” I asked.“Through God’s Grace,” he replied.

After this event, however, I did not think about this invitation anymore because I did not see any possibility of going to New York.

One evening I prayed with all my heart that Jesus would reveal his will to me. That night I had a dream that was more real than life. I saw a health food store and went in. Gunthita was at the counter selling a big crystal for a good price. A lady was sitting in front of a pillar, and when I looked at her, I realised that she knew everything about the present, past and future. I asked her if I should stay in the convent or not, and she replied, “For you it is better to leave.”

I wanted to know why. Her clear reply was, “They do not understand you, and they are preventing you from living according to your inner destiny.”

In this way I received the answers through my soul itself, represented by the woman in the dream. Later, Sri Chinmoy told me that Jesus himself had brought me to him, and this I can confirm.

Once you have established
A solid inner link
With your spiritual Master,
Yesterday’s Master, today’s Master
And tomorrow’s Master
Will all become one in your life.