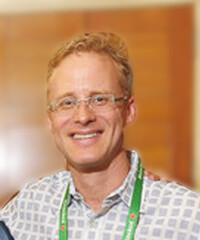 One year, I got very sick during the New York City Marathon. I took some aspirin along the way, thinking that it would help my sore muscles, but it actually caused a real problem in my stomach. It unfortunately started a chain reaction that started to break down my intestines.

When I ran through Central Park, I saw a disciple-friend of mine who is my coach. He was very frightened when he saw me; I had no colour in my face. And then someone I knew from the United Nations saw me just before the finish line and they had the same reaction.

When I crossed the finish line, immediately two people came up to me and said, “Are you okay? Why don't you come with us?” They took me to an emergency tent and gave me something to drink, and I got a hot chocolate. My stomach started to knot up very painfully. This was happening every five to eight minutes in a very intense way. I went to the bathroom, and it was blood. So, they immediately put me in an ambulance to take me to the hospital. By the time I got to the hospital, I was in extreme pain. I couldn't drink anything because that made it worse.

The nurse came up to try to give me an IV. They couldn't find the vein because I was so dehydrated. I was on the hospital bed in absolute pain, but they really didn't know what to do with me, so they just kind of left me there. At one point, a nurse asked me, is there someone in your family we could call? So, I gave them the number of my friend Kirit and said, “Please call him.” Kirit ran faster than me, so I knew he would be home by then.

After that, I felt much better. When the nurse came in again, she immediately was able to get the IV in my arm. So finally, I was doing better, and some disciples came to take me home.

They took me home and put me in bed, but it was starting to hurt again, and it was getting very bad. Guru called my room, and one of the boys picked up and told Guru that I was in pain again. Guru told them to take me to Long Island Hospital. This time, he had two boys in the Centre who were doctors come and stay with me. They finally got the IV in my arm. It took four liters to get me rehydrated. I spent the night in the hospital. In the morning, I finally stabilized, and I was able to go home.

So later in the morning or afternoon, I managed to go to Aspiration-Ground and Guru meditated on me. Then the next day, at PS 86, Guru asked how I was feeling. Guru said, “I put another strong force on you this morning. Did you feel it?” Maybe I didn't quite understand the question, but I said, “No” and Guru started laughing.

I feel very grateful and also I feel a responsibility to share with people a direct experience of Guru's very spiritual occult power. It was so powerful, I'll never, ever forget it.

There is not a single day
When spiritual Masters
Do not use occult power
In the inner world
For the betterment and enlightenment
Of mankind.

More stories by Natabara »
Next story