An Eastern Yogi who was here to teach me

When I heard this and read this, I started to breathe heavily, I do not know what happened, but suddenly I was not anymore in the bed, but I was traveling through a tunnel and very, very far away. There was a dot of light, and we were traveling very fast through the tunnel towards this dot of light. Slowly, slowly as we approached, the dot became very big. We were just about to reach the light. At that moment, a thought came to me, very powerful: maybe you will die when you go out of this tunnel, and maybe you have to. You can still stop. Immediately, a very strong energy came to the fore from inside and said, “No, let's go!”

I was entering into this light out of the tunnel and the next moment, I was floating like a cloud in a vast white space. I felt at home, completely comfortable and well, and everything was only white light everywhere. I do not know how long I was there. But afterwards, I remembered this, of course, and I wanted to go there again.

It felt exactly like when (later) as a disciple, I had a very good meditation. But I was not used to it; I was only 15 and I had no idea about meditation. So, every evening when I came back from school, I was lying on my bed and trying to enter this world that I had experienced. Then I could observe something that was happening in my brain.

There was like a light going from one side to the other, and at some point, it met a string from the other side and then there was a little lightning. When that connection was done, I was able to think new thoughts. This happened quite a few times, and I was going to a whole new world inside. It seemed to me I could observe how my capacity to be aware and be conscious was expanding.

One evening, I saw the face of a person, of a man, and behind it, a group of people, but not clearly. One group was white and one group was colourful. But I could not see them precisely. Only the face was clear. This face was very beautiful and also quite young. It was clear to me this was a Yogi, and he was my teacher. I had never read about yogis; I had never heard about yogis. But it was clear to me. This was an Eastern Yogi who was here to teach me.

Later, when I became a disciple, it was clear that I had seen Guru and I had seen the disciples, the boys wearing white and the girls wearing colours. From that time on, when I was entering into this inner world, I could solve problems. So, if I had any kind of problem or I wanted to know something, I could just enter it and the next morning I knew the answer.

My brother was a very intelligent person; he was like a phenomenon. He was studying his books so hard that sweat was flowing down. It looked very, very rough and very tough. So, I told him, “Why do you torture yourself so much? It's so easy. The important thing is that you make a decision and then you can enter the problem, and the next morning, you know the answer.” But he never could do it.

It was 1962, and I was 15. This was the time when Guru was preparing for his journey to the West. It was Guru who gave me this blessing to make me conscious and who even revealed himself to me so I could see his face.

You can run faster than the speed of light
In your inner life
If you invite your illumination-soul
To teach you how to live
Inside your own heart-world. 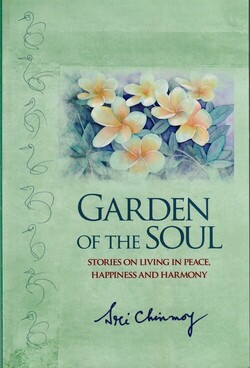