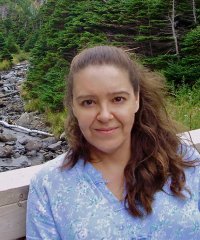 I became a disciple when I was living in Toronto. In March of the following year, I was invited to New York for a weekend with some of the Toronto disciples who were driving down. It would not be the first time that I had seen Guru, but it was my first time in New York. I had written a poem for him and asked a fellow disciple, with whom I was staying in New York, how best to give it to him. She suggested that I order some flowers at the Garland of Divinity’s Love, a disciple-owned flower shop, and put the poem in a card to be delivered with the flowers.

When I entered the shop, I was immediately impressed with the beauty of all of the flowers inside—especially the enormous roses and the exquisite “gratitude” orchids. Nevertheless, I was a bit shy, as a fairly new disciple, and felt that it would be somewhat ostentatious for me to send Guru such big flowers, as if to say, “Look at me!” I told myself that I should order something “modest.” And anyway, in my mind, the flowers were merely the vehicle for the delivery of the poem. So I chose some simple purple asters (the flower of my birthday month) with some lovely smelling eucalyptus branches.

While waiting for Guru to arrive at that evening’s function, I could see my own flowers with a number of other arrangements on the table by his chair, which was on the stage. As soon as he came in, he sat down, looked at the flowers (though he did not read any of the cards), and began to meditate in silence.

After some time, he said, “Anyone who has ever written a poem for me, come up and read.” Quite a number of people went up and formed a line on the stage. One by one they went up to the microphone and read a poem from the designated book. I did not go. The disciple who had recommended to me that I send the flowers was encouraging me to go up, knowing that I had included my poem with them. But I still felt very shy, and felt that it was not appropriate for me, as such a new disciple, to go up with all the others. I said to myself that I should be “modest”— again using the same word that I had while in the flower shop.

After a while, the line dwindled and the reading ended. Guru meditated for a bit more in silence and then said, “There are still some people who have not come up who have written poems for me.” More people went up—about half as many as had gone before. But once again I didn’t go, for I just kept telling myself the same thing—that I should be modest.

Once more the line dwindled, and once more Guru meditated in silence. Then he said, quite forcefully this time, “No, there are still some people who have written me poems.” About four more people went up, while I sat there doggedly repeating the same old stupid refrain about being modest in my mind, until Guru said, “Don’t be modest!”

What was I to do? I felt that I had been seen through at that point. So I finally went up and read a poem (though I don’t even remember which poem it was, except that it was about silence).

In any case, I was the last person in line on the stage by that time. Thus it happened that, when I had read the poem, there was no one behind me in line to pass the book to. I turned to look at Guru as if to ask him what to do with it. He stretched out his hand, and as I gave him the book, he asked me what my name was and what Centre I was from.

This was the only time that Guru ever spoke to me directly in the outer world, though he has spoken to me many times in my dreams. But from that moment on I knew very well that Guru can easily read our souls, hearts, and the thoughts in our minds. I also knew that what I was calling “modesty” in my mind was really only fear, and not at all what Guru wants from us!