'This advice has guided me in leading my people ever since'

In December 2003, Sri Chinmoy set forth on a journey to Indonesia with a few hundred of his students from many countries. It was part of their annual Christmas and New Year’s travels to various countries. Their first destination was the beautiful green island of Java, the main island among the thousands of islands of Indonesia.

Indonesia has a very rich and ancient culture, with Islam layered over its previous religious traditions of Hinduism and Buddhism. The dynasty of rajas (kings) in Indonesia originally came from India. Sri Chinmoy specially wanted to spend some time in Solo, capital of the ancient Kingdom of Surakarta.  Although he had visited Indonesia on several occasions before, this was his first visit to Solo, the historic royal city of Indonesia.

His students made an appointment for him to pay his respects to the elderly King of the region, but before Sri Chinmoy had the chance to go to the Palace, the King himself came to see Sri Chinmoy at his hotel. This particular King was very famous in Indonesia. Hailed as the King of all the Kings of Indonesia, he had been on the throne for more than 60 years. Although his proper name was His Majesty King Pakoebowoeno XII, he was respectfully known by the title Sinoehoen. Sinoehoen is a Dutch word that means ‘King of Kings’, dating back to the years when Indonesia was ruled by the Dutch.

Sinoehoen came to see Sri Chinmoy on December 7th, 2003. Travelling in an unmarked car so as not to attract large crowds, he was accompanied by one of his sons, Prince Dipokusumo, and his personal secretary.  As Sinoehoen arrived, he cast a glance to his right and saw an Indian man wearing a sky-blue dhoti and kurta coming to welcome him. The King stopped in his tracks, his eyes glowing with joy.  “This is the man!” exclaimed the King to himself (as later recounted to his son). “I have seen him many times before during my meditation. His face is so familiar to me.” That man was Sri Chinmoy.

The two men clasped each other’s hands and bowed deeply to each other. Sri Chinmoy escorted Sinoehoen to a private room where they had a silent meditation together. Then Sri Chinmoy played for him on the esraj, a stringed instrument from northern India played with a bow to create haunting melodies.

Afterwards, Sri Chinmoy began speaking to the King, referring to God as Allah to honour Sinoehoen’s Muslim faith. He said:

I wish to offer you my love, my appreciation and my adoration. I am a man of prayers.  While I was praying with you, I was praying to the Almighty Allah to bless you with His infinite, infinite Affection, Love, Joy and Pride. I have come here to be of service to your beloved country and specially to you.

Your Majesty is a very, very good and noble King.  As soon as I saw you, I clearly felt in your heart that you are a true man of prayers. You started praying and meditating not only in this lifetime, but many, many lifetimes ago. This is the continuation of your spiritual life. Therefore, the Almighty is extremely pleased and proud of you.

He went on to explain, “I first saw Sri Chinmoy 25 years ago while I was meditating alone in the Palace. He came to me in my meditation. He had a smiling face — exactly the same smile as he has now! He was wearing a white Indian garment below, along with an Indian-style top. We had a most significant discussion during which Sri Chinmoy gave me very important advice. This advice has guided me in leading my people ever since.”

Others in the room gasped in surprise at the King’s astonishing revelation, but Sri Chinmoy simply smiled. From the moment he laid eyes on the King, he had recognised him as a member of his own immediate spiritual family.

The King continued, “Sri Chinmoy told me that neither I, nor any­one in the Royal Family, should enter into politics, as that would not help my people in any way. He guided me on the path to become the Father of the Nation, the Father of all my people. That is the same advice that my forefathers have given me. Sri Chinmoy encouraged me to join with him in working to make the world better.”

Listening to the King’s words, several of Sri Chinmoy’s students present were reminded of Janaka, Shivaji and other Kings from Indian history who sought the advice of holy men to govern their kingdoms wisely.

After a pause, Sinoehoen added one more comment, “Sri Chinmoy and I met 25 years ago for the first time, but it feels to me as if it were yesterday. He came to me again 20 years ago and then several times after that.  We have been sharing and communicating inwardly. Sri Chinmoy and I actually have the same inner foundation, which is Allah or God.” 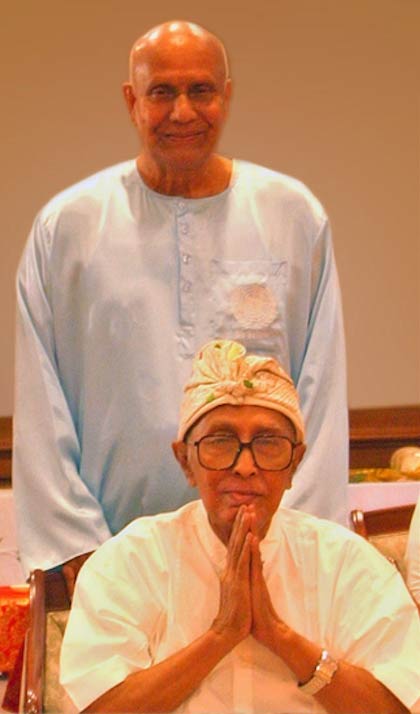 Very humbly, Sri Chinmoy replied, “I know that the connection between His Majesty and me is very, very strong.  As soon as we saw each other on the physical plane, we recognised that in the inner plane we established our closeness and oneness long, long ago. Immediately, we recognised each other. “We are brothers! True brothers! It is my duty to be of service to my elder brother. I am the younger brother and he is the elder brother. It is my duty to love him and to serve him.” Later Sri Chinmoy revealed that the King and he had been closely connected hundreds of years earlier in a past life in India.

As Sinoehoen was listening to Sri Chinmoy’s words, a profoundly fulfilled look came across the King’s face. His deep awareness was both confirmed and extended yet further. “We have met now both in this world and in our spiritual life. The spiritual life is the eternal life,” he averred. Referring to their upcoming meeting three days later, the King added, “I will share more details at the Palace.” This then is the story of how a spiritual teacher from the Hindu tradition and a Muslim King of Indonesia became closer than the closest in the inner world 25 years before they met in the outer world.

Perhaps Sri Chinmoy had known that something very unusual would take place that day. The night before, he had said to his students, “The King is a very spiritual man.” Then Sri Chinmoy mused, “How I wish I had some occult power! If I had occult power, I would show it to the King.” They had often heard Sri Chinmoy joking about not having any occult power, but in the course of their own lives, they had witnessed it many times. However they knew it was something he did not usually like to reveal publicly.

Sinoehoen’s profound inner experiences prove that the inner world is far more real than we can ever imagine.

A Grand Welcome at the Ancient Palace

A few days later a magnificent programme took place, with all the King’s court and all the members of the Sri Chinmoy Centres then in Indonesia together at Sinoehoen’s palace inside the grand Ceremonial Hall.  Also gracing the occasion with his presence was the Hon. Prof. Dr. Haryono Suyono, an extremely close brother-friend of Sri Chinmoy, who was one of the highest ranking ministers in the cabinet of B.J. Habibie, President of Indonesia. It was Dr. Suyono who initially had made the introduction of Sri Chinmoy to Sinoehoen.

Five years earlier, Dr. Suyono had introduced Sri Chinmoy to President B.J. Habibie of Indonesia, arranging for President Habibie to experience the deep peace of Sri Chinmoy’s meditation and music on the eve of President Habibie’s historic decision to end a decades-long war and offer freedom to East Timor.

In the Grand Hall, Sri Chinmoy honoured the King of Surakarta by physically lifting him overhead on a ceremonial platform and presented His Majesty with a special medallion, as part of the Lifting Up the World with a Oneness-Heart programme in which the spiritual Master recognised distinguished individuals in all walks of life.

Then Sri Chinmoy addressed the King:

The seeker-brother tries to be of service to the Almighty by reaching higher planes of consciousness. The King-brother spreads his self-giving heart and hands to cover the length and breadth of the world. The one aspires to bring down light; the other aspires to offer light to the four corners of the globe. “Three days ago on the physical plane, you and I were able to meet. Previously we met in the inner planes, the spiritual planes.  We have now seen each other on the physical plane, and we feel that our inner oneness has now fully blossomed in our outer lives.

May Almighty Allah shower His choicest Blessings upon us so that you and I,  Your Majesty, can work together on the strength of our self-giving hearts for the betterment of the world and to raise the consciousness of humanity.

Sri Chinmoy then performed a stirring Peace Concert of his spiritual compositions on many different instruments in honour of Sinoehoen and his entire royal family. The music wafted up to the high roof beams of the hall, which echoed and re-echoed the dulcet tones.

In turn, Sinoehoen presented Sri Chinmoy with several royal pins and a beautiful sash, officially conferring upon the spiritual luminary the title of Prince of the Royal Palace “for his faithfulness to His Majesty the King and the Palace of Surakarta.” This title was previously held only by the King’s own four sons.

“Sri Chinmoy is a real leader in our world today. He gives all he has to serve the people. I feel that Sri Chinmoy is the true world leader. He knows the secrets of life. Sri Chinmoy has the key to open up the heart of the whole world.”

A few weeks later, the King and his family joined Sri Chinmoy and his students for ten days in the beautiful island of Bali, the only Hindu island in the Muslim nation of Indonesia, where Sinoehoen invited the eight Kings of Bali to meet Sri Chinmoy at a special banquet in their honour. Later Sinoehoen remarked to the spiritual Master,

“Your way is to love and serve others. Your way is flooded with infinite wisdom, compassion and concern…“With the Blessings of God, our meeting in Bali will result in good things for all the people.… Hopefully, even from a long distance, you will still guide me spiritually and physically so together we can help all the Indonesian people and all the people of the world.”